omarandjohnny's "Every Saturday Is Halloween" tradition exploded a bit this year, as I wanted to do way more characters than October has Saturdays! So it all bled over into November/December a bit. I also had no time to document apart from Twitter posts, so I wanted to do a couple of round-ups here to have them all in one place.

My first theme derailed a little - I'd wanted to do leading Disney ladies with a Halloween spin, kind of an undead Disney Princess thing, with little tie-in stories about how they got that way (like, if you marry an emotionally stunted ex-Beast with anger issues whom you've known for ~3 days, you're gonna end up murdered, and he'd probably Bluebearded a bunch of other village girls already). But it didn't really work out that way because a) it felt too forced and preachy and b) after a few rounds, I lost interest in doing gory wound make-up. So some ended up dead, some didn't. It was fun to play with anyway.

1. Undead Ariel
This one didn't have a story - I'd planned to have her caught on a fishhook, but I am not crafty enough for a mermaid tail, so I ended up going with be-legged Ariel. Who is randomly a zombie, lol. I was super-chuffed when I found a dress at the op shop that was a near-exact replica of her sparkly blue dress from the end of the movie: 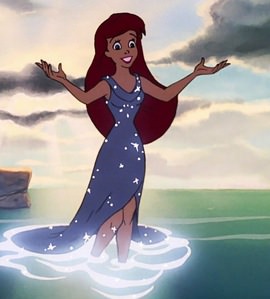 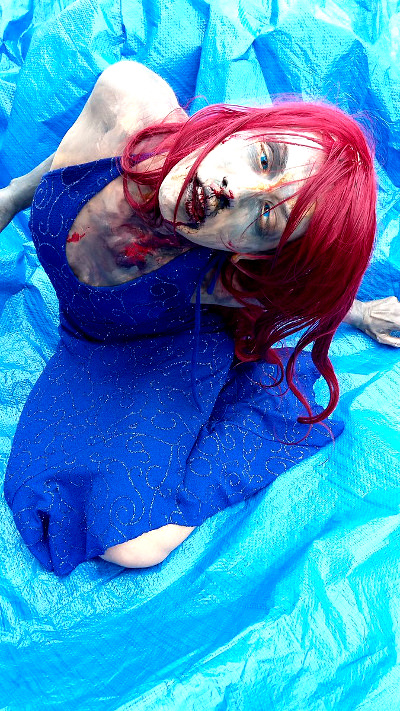 (incidentally, the dress was a perfect fit and is really nice, so I made sure not to splatter it with fake blood too much in case I ever want to wear it to something actually fancy, lol) 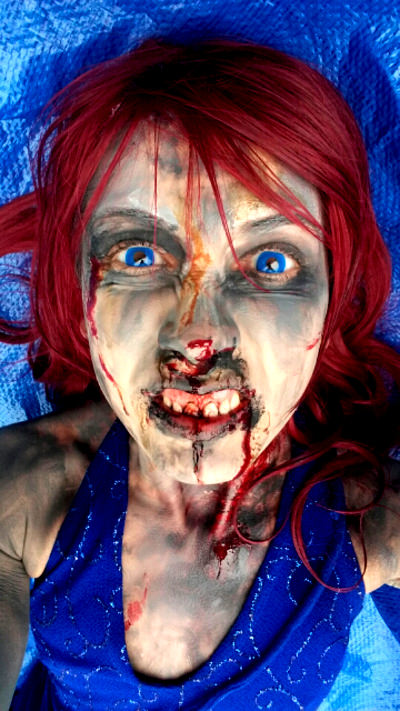 Basically just lots of zombie make-up and fake blood. The contacts were one of the few pairs that actually did what they were supposed to - I bought a bunch of different colours this year but most of them ended up being too subtle to actually change the colour much, which was annoying. Halloween is not a time for subtlety! 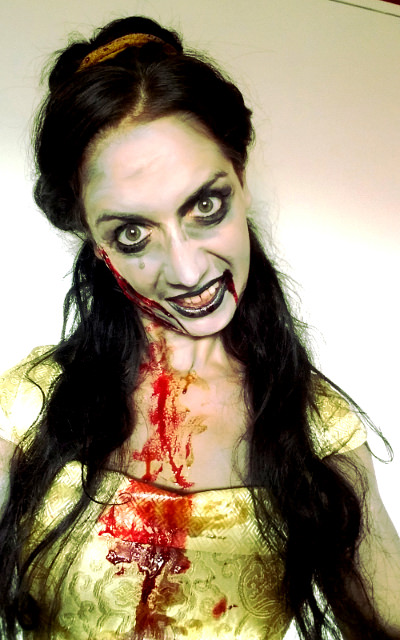 I was going with a murder mystery thing here where the Beast had an alibi for Belle's untimely demise-by-mauling and the poor wolves got blamed. She still liked to read after returning from the dead, because I was obsessed with the idea of her enjoying Pride and Prejudice and Zombies!

This was one of the few costumes I used my own hair for this year - it was a bad hair day, which was perfect for that greasy post-mortem look. 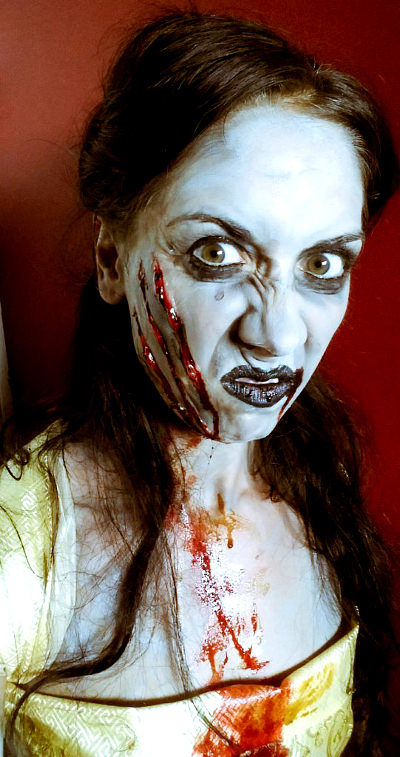 The dress amused me greatly, as I literally Scarlett O’Hara-ed it out of a bit of curtain fabric from the op shop. There was no sewing involved, only draping and tying/pinning, so it would not have held up for anything involving vigorous movement, but it was good enough for a photoshoot. 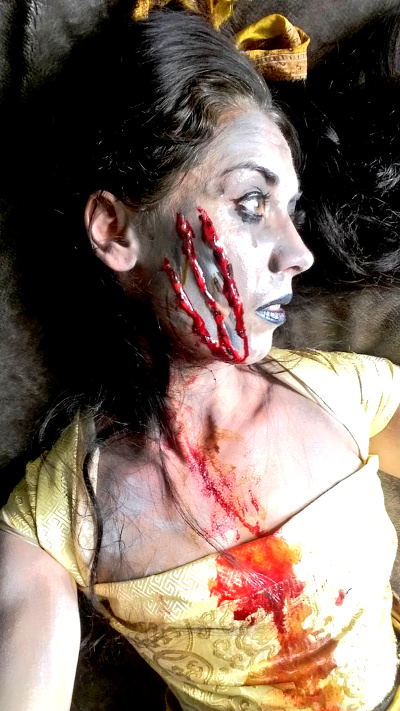 This was also the first time I played with latex for scars/wounds. Very messy to apply but I did have fun with it. I need to get some better fake blood next year though, the stuff I bought this year was way too fake-red.

Unexpectedly, this was one of my favourites. I'd kinda run out of gore make-up ideas by then but I amused myself with a PETA warning about the dangers of exotic pets. 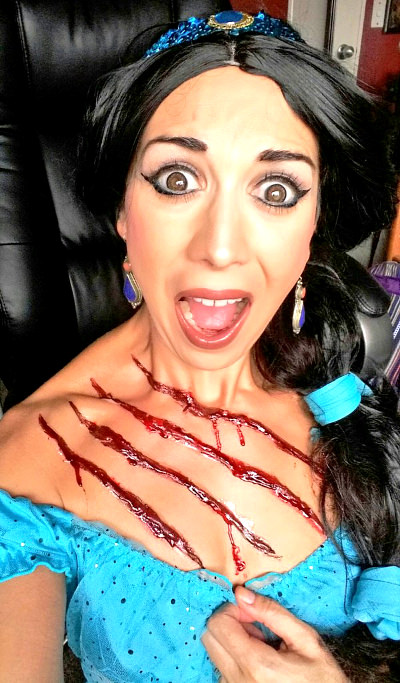 "Hey princess, maybe don't keep a tiger as a pet," no one had told Jasmine ever, inexplicably. 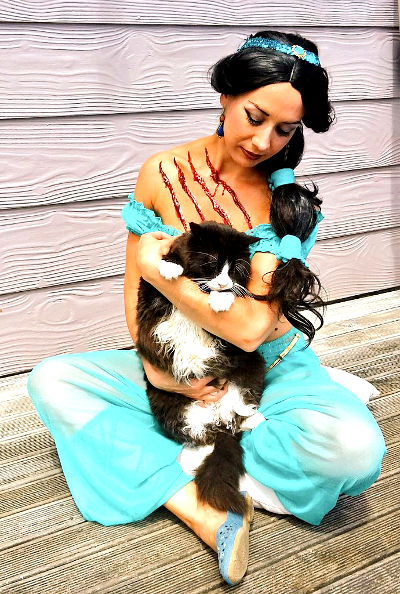 "Like, maybe a nice cat? TIGERS ARE WILD ANIMALS."

The make-up for this was pretty easy, I found the costume for super-cheap, and the hair ended up working much better than expected, so I was really pleased with how this turned out. Plus it was comfy (always a bonus).

Speaking of easy! Esmeralda is by far my favourite Disney girl (Hunchback is so underrated, honestly) and I had so much fun with this one. I'd toyed with the idea of zombifying her as well, either by going with book canon, where she's hanged, or with a "Quasimodo doesn't save her and she's burned at the stake" thing, but I didn't really like either of the options and I basically really didn't want her dead, so... 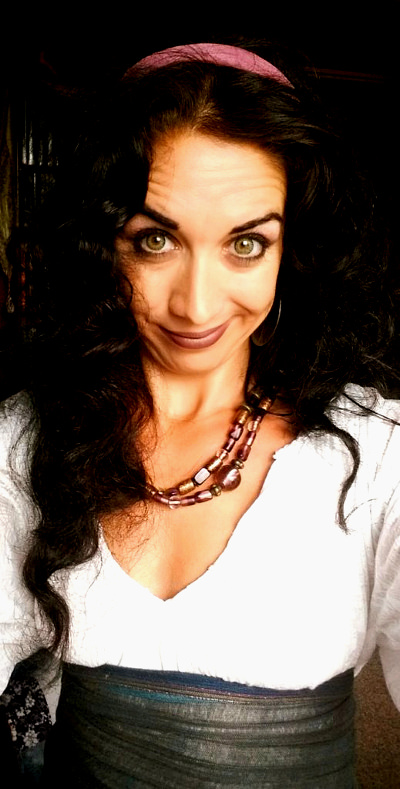 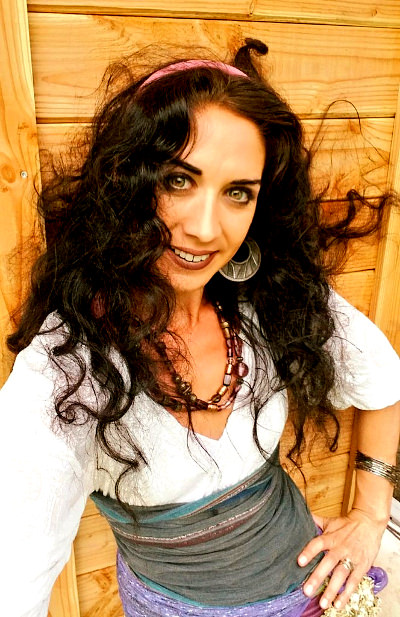 The necklace was handmade by

lilithilien; the rest of the costume is basically “stuff from my closet” plus a cheap blouse from the magic op shop that always seems to have exactly what I’m looking for! (srsly, I found a Lord Golden coat there exactly when I wanted it. It’s magic.) 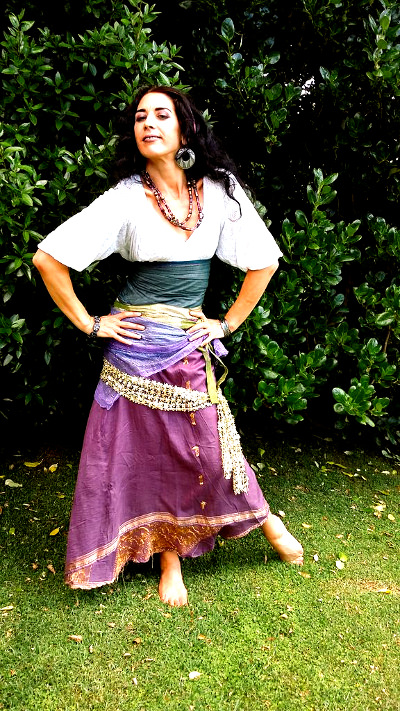 This was a joint project with the lovely

spaghettitoes, who cosplayed Anna, putting together a jaw-droppingly awesome costume. I was much less happy with mine, as I’d had grander plans (icicle impalement, etc.) but nothing quite worked - the wig was weirdly made and annoying, since it refused to cover all my hair; I was really tan by then, so I spent ages powdering and desperately trying to achieve a pale ice queen look, and it was a really hot day, which destroyed any thought of attempting to play with ice. I am pleased that it turned out good enough in pictures eventually but it was definitely the most challenging look. 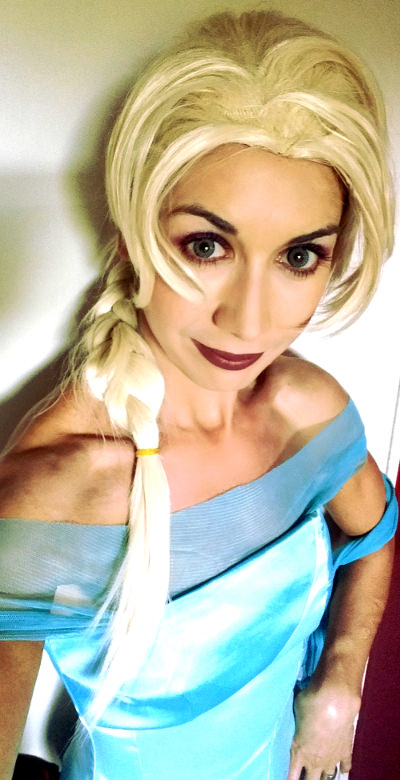 These contacts were supposed to be pale blue. Yeah right. 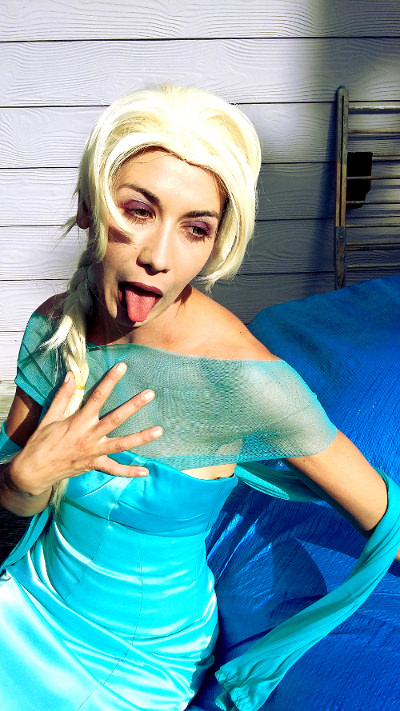 By necessity, the theme was “Elsa dies of heatstroke.” The cold may not bother her, but a Southern hemisphere summer sure would! 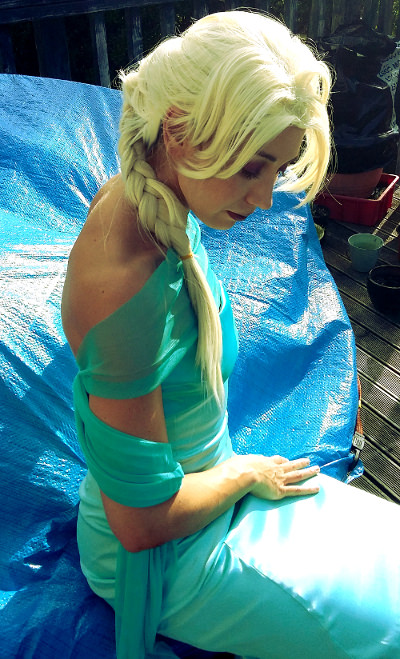 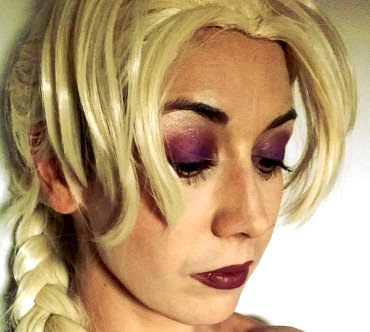 I did have fun with the make-up, as it’s a completely different colour palette from what works for my usual look. Purple! 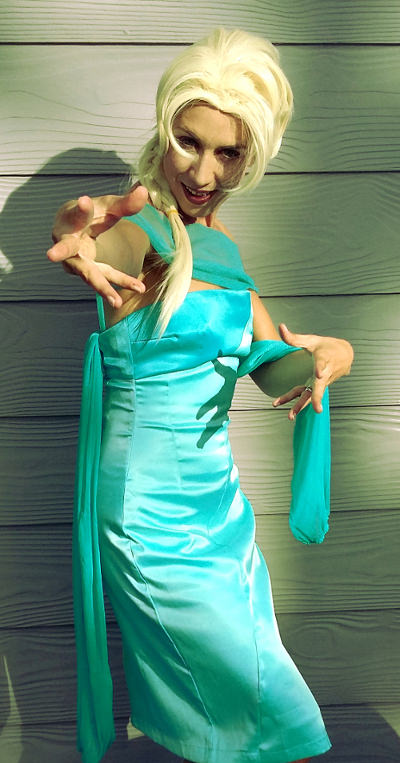 The dress was another op shop find. Magic, I tell ya. 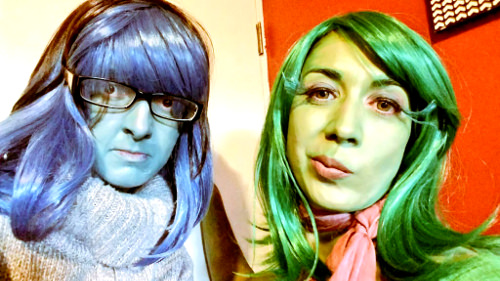 This was my actual Halloween costume, with a guest appearance from the ever-obliging

alsha that was just too freaking perfect! Look at her! 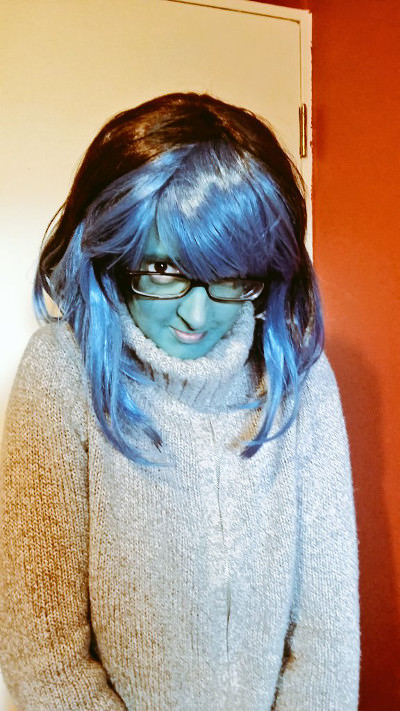 We went with our fav/most relatable characters from Inside Out - these two are definitely in charge of our respective brain-consoles, so it was really fun to wear them on the outside for a bit. 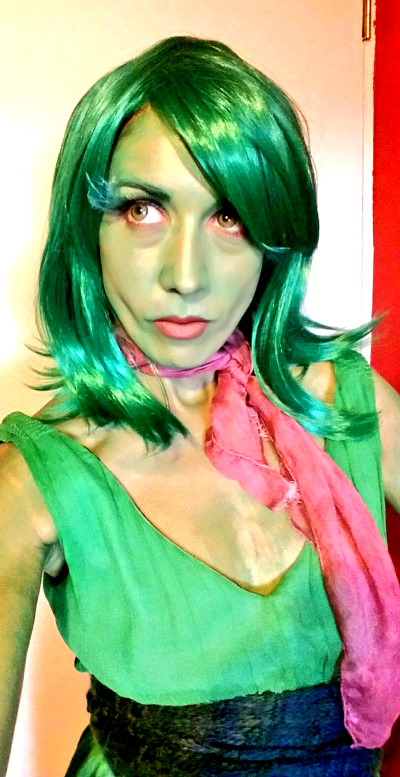 It was another challenging look in terms of make-up (all the green body paint! and the fake lashes drove me bloody nuts!) but I was really happy with how it turned out.

That’s it for the Disney characters! There’ll be another round-up post shortly for my Fool/Amber series.
Tags: cosplay, picspam
(Read Comments)