If I had to pick one favourite fictional character, it would always be Robin Hobb’s Fool. As Assassin’s Fate came out this year, wrapping up a 16-book fantasy epic of unsurpassed scope, originality and skill (not to mention an intentensely emotional journey), I decided it was the perfect time to pick some of his personas to cosplay, eventually settling on 6.

As with Malta, this involves spoilers if you haven’t read the books.

1. King Shrewd’s jester
This covers the very early years, roughly the Assassin’s Apprentice era. The Fool is described as near-colourless, with white hair and pale skin and eyes, usually wearing motley in his role as King Shrewd’s court jester. 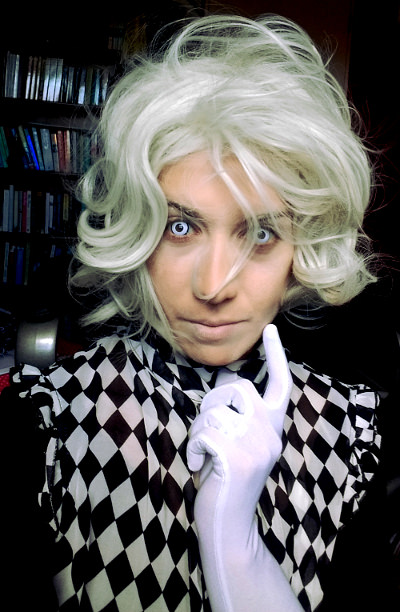 This was fun and relatively easy, except for covering up my tan (he is at his most colourless in this early stage, so naturally I tackled this costume after several weeks in scorching NZ sun, lol). His hair is described as kind of dandelion-fluffy, which this wig didn’t really do, but I was pleased with its colour and tousle. 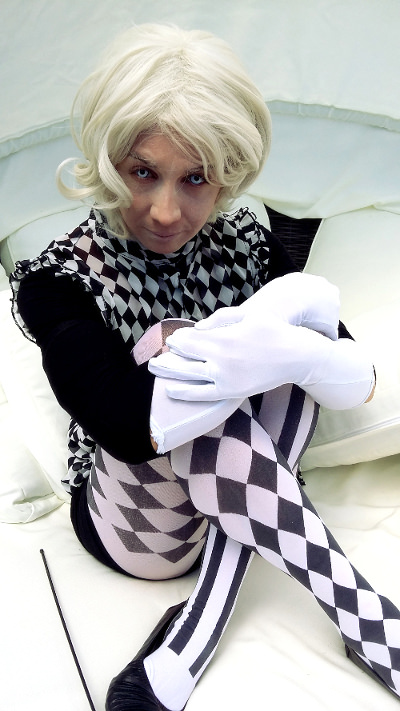 It was surprisingly hard to find some motley that wasn’t garish or obviously costume-y. Eventually I settled on a pair of basic tights and a non-costume second-hand blouse (that I had to fight a hard bidding war for!) plus dollar-store gloves. I did experiment with a Ratsy stick but the cats kept insisting it was a toy. 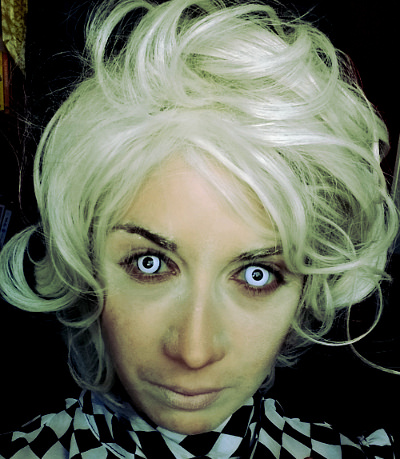 Another close-up. These contacts would NOT stay centered on my pupils and insisted on doing a lazy eye thing in 9 shots out of 10. I guess I can claim it adds to the otherworldliness? lol


2. The toymaker / In the mountains / Verity’s garden

This is the stage after his first on-page hue change, rendering him a shade of pale golden; it’s what I think of as “the young Fool,” even though he was obviously already older than he looked (but Kettle was still right, he and Fitz were basically a pair of idiot boys). Covers parts of Royal Assassin and all of Assassin’s Quest. 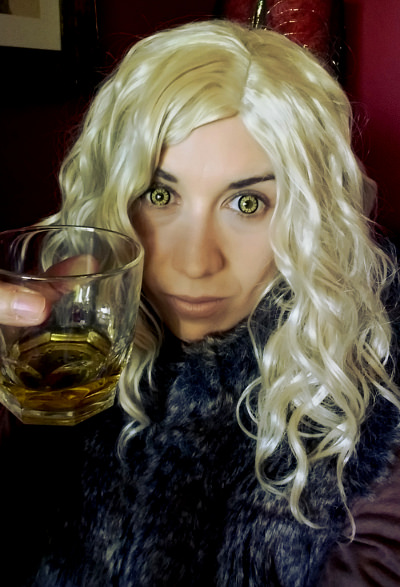 A pair of contacts that actually worked; my trusty faux-fur vest in an approximation of winter garb; a wig that I really loved; and some Glenfiddich standing in as Sandsedge brandy. 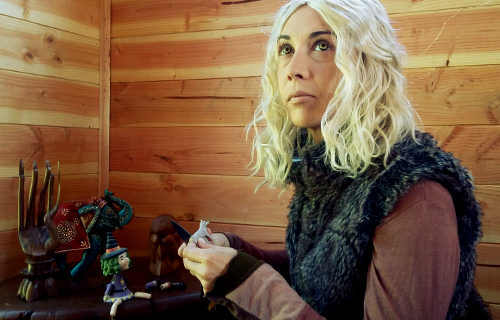 This was based on the Fool’s time as a toymaker in the Mountain Kingdom. If you look carefully, you’ll spot he’s carving a tiny Nighteyes. 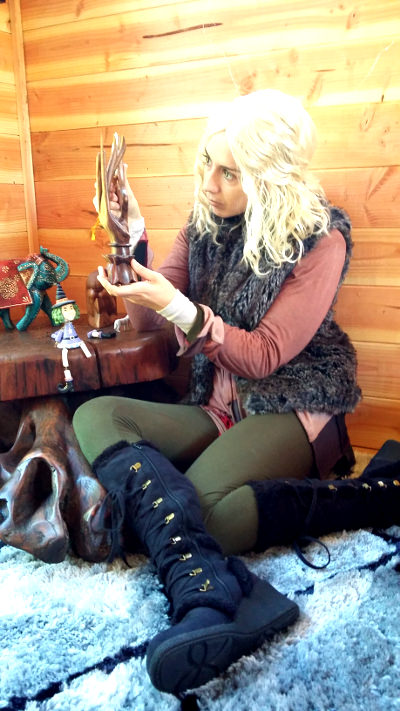 More toymaking. You can’t see all of it, but the table in the background is made of prehistoric New Zealand swamp kauri, which if you read up on it is basically wizardwood. Wellington Zoo conveniently had Verity’s Dragon right there! Topaz was helping out as Nighteyes. (This is legit the most dignified she has ever looked and it took about 50 photos to get there, lol).

I don’t think Amber needs explaining. I’d cosplayed her once before, a few years back, but it was very haphazard and I wasn’t happy with the result. I’m much more pleased with how this one turned out.

As a baseline reference, my IJ banner is John Howe’s depiction of Amber and Paragon. As a bit of interesting trivia, the seashore is actually modelled on the Seatoun beach area of Wellington, which is kinda neat.

“I can see that you go through life athwart it. You see the flow of events, you are able to tell how you could most easily fit yourself into it. But you dare to oppose it. And why? Simply because you look at it and say, 'this fate does not suit me. I will not allow it to befall me.' I have always admired people who can do that. So few do. Many, of course, will rant and rave against the garment fate has woven for them, but they pick it up and don it all the same, and most wear it to the end of their days. You... you would rather go naked into the storm. I cannot abide that you should do that. So I offer you a bead to wear.” 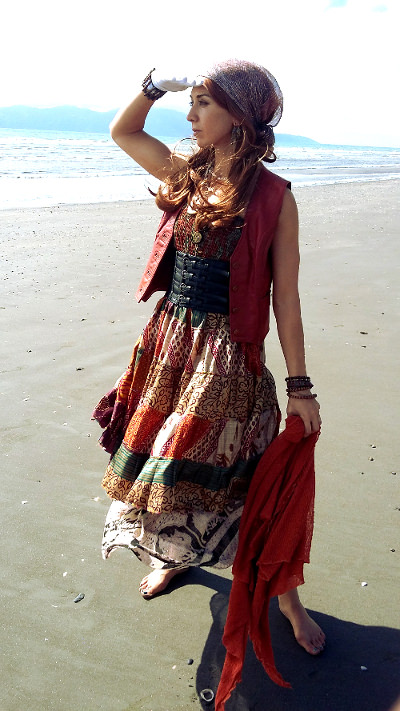 The colour scheme here was, of course, various browns: wooden beads, amber jewelry, tawny hair, a darker skin tone. Amber’s clothing in the books is described as basic, genderless, hempen brown, as in the John Howe painting. I tried just wearing layers of simple cotton brown at first, but it ended up looking mostly “Aldi, wearing brown things,” so I decided to go a tiny bit fancier while hopefully still preserving the concept of Amber: a touch of the Rain Wilds in the layered, belted look, some creams, burnt umber, and greens mixed in with the brown. The leather vest was added for a touch of “artist at work,” for practicality in her shop and/or shipboard, and a smidge of androgyny. Our beach proved handy for driftwood and atmosphere. Jewellery close-up - amber and brass. The feather set was made by

omarandjohnny. The amber pair was a gift from

sarajael. The hair is technically too dark (more red than tawny) but it went with the costume, and seemed to work once I added a scarf. (Apparently my cheeks go freckly in the sun.)

Arguably the most irritating of the Fool’s personas in the books, Lord Golden was actually really fun to cosplay. A golden peacock, showy and flashy, with scores of admirers and not a trace of his usual subtlety. My trusty op shop provided me with a ridiculous, gold-embroidered coat just when I needed it; the rest was ostentatious glitz, feathers, gold gloves, lavender neckcloths, and my campiest boots. 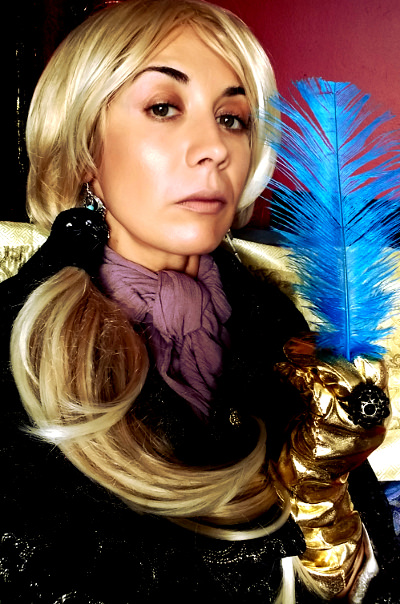 Not highly visible, but that is supposed to be Fitz’s/Burrich’s earring with the blue stone caught in a dreamcatcher-like net. (tacky gold gloves, ostentatious ring, and jewellery from the man you devastatingly and unrequitedly love, what better dress theme could you want)

Angling slightly away from Lord Golden’s scandal-ridden and lavish court life and towards the heartbreak of Fool’s Fate, which I otherwise left out of this narrative, here is a cameo from the lovely

alsha and her convenient dragon tattoo: I had briefly considered doing the Brown Man from the end of Fool’s Fate, but a) it was too emotionally scarring and 2) he didn’t offer a whole heap of costuming options. Instead I skipped a good ~20 years and went straight to...

Covering the end of Fool’s Assassin and early parts of Fool’s Quest, this era was extremely frustrating/devastating to read about and extremely disgusting yet fun to cosplay. It just involved putting down newspaper wherever I was likely to step, and then a bunch of fake blood, real dirt, and gleeful destruction of old long johns and new bandages. And of course, Bee’s apple. Please note the twisted/broken/club foot. I had fun making it.

Full-body view. Everything was super-gross, which was very fun. The dog did not appreciate me usurping her under-the-house dirt pit she likes to rest in, lol. See? She was DISGUSTED.

This covers the latter part of Fool’s Quest and the early parts of Assassin’s Fate; I opted to lean more heavily on the Kelsingra period and the Fool’s return to Amber than the latter parts of Assassin’s Fate, which I didn’t think I could capture. I focused on the dragon-induced changes after the consumption of dragon’s blood; dragon eyes, scales, and a touch of that lavish Elderling dress style, with lots of gold to emphasize the Fool’s previous personas. I’m not sure how well it shows up in photos, but the hair is kind of an ashen blond, with tinges of grey remaining; returned to better health but with a bit of Mage Grey lingering. The eyes, of course, are all dragon. And that’s pretty much it. I was going on very personal visuals, so obviously this will not coincide with everyone's ideas, and there’s only so far I can go in terms of gender fluidity. But it was an amazing challenge and I enjoyed every minute of it.
Tags: cosplay, picspam
(Read Comments)