It's been a not very active fandom year, but I like to keep some sort of record anyway, so here goes.

1. Your main fandom of the year?
Didn't really fall in love with a new fandom in a major way in the last couple of years, so the main one would still have to be Spartacus.

In books, it would definitely be the Fitz & the Fool series, but it's a bit odd thinking of that as a fandom; with an author that's anti-fanfic, it's always a bit limited.

2. Your favourite film you watched this year?
Probably The Last Jedi, which really worked for me. I'd taken some care to not follow the thousands of teasers and trailers and trailers-for-trailers beforehand so everything would come as an actual surprise, and afterwards I sort of did the same when I saw the internet immediately launching into detailed analyses and critiques and I just wasn't in the mood for it. I know some of the criticism will be well justified but for now I'm just enjoying how much I enjoy the film.

Another pleasant surprise was The Mountain Between Us - I love survival stories and Kate Winslet and Idris Elba had amazing chemistry.

I also loved God's Own Country. Gay Boys With Issues, and also sheep. What more could you want.

3. Your favourite book read this year?
If I had to pick just one, it'd definitely be Assassin's Fate. Such an amazing end to such a long and emotional journey.

In rereads, The Shoebox Project. My Marauders feels were exploding all over the place. 4. Your favourite album or song to listen to this year?
I have failed on music entirely this year. Nothing stands out really.


5. Your favourite TV show of the year?
Season 4 of You're the Worst. I love these fucked up characters so much <3333

I loved the final season of Orphan Black - I'd been afraid of whether they'd manage to pull all the threads together but they did. Tatiana Maslany is incredible.

Season 2 of Stranger Things was also superb, and the Black Sails finale was pretty damn epic (I knew it! hah). Sense8 was also good, though not as amazing as expected.

I've also been getting into Underground, which has some amazing performances, and lately I've been enjoying Masters of Sex.

In rewatches, Skins and Looking, both of which were strong with the feels.


6. Your best new fandom discovery of the year?
I... don't think I discovered anything entirely new? It's mostly been new seasons of ongoing shows and rewatches/rereads of old favourites.

7. Your biggest fandom disappointment of the year?
I finally caught up on Doctor Who season 9 in preparation for 10, and it was so frustrating - there were so many genuinely good episodes and story arcs and Clara takes away so much enjoyment from them. It's extra-sad because I've finally grown to love Twelve. Matt Smith will always be "my" Doctor, but to date there hasn't been a Doctor that I actively disliked, I just had a hard time *getting* Capaldi's take on him, and I think a companion who vibed well with him would've been immensely helpful. But I detest Clara and she was a massive hindrance to my enjoyment of almost all her seasons (she got the benefit of the doubt for the first one).

Season three of Outlander has also been pretty faily, but I don't care that much since I mostly watch it for shallow entertainment and to have something to mock. (Still, I did had a genuine ragey moment when they cut the Jamie/John kiss. Like, sure, let's linger in graphic detail on every rape scene but god forbid we show a consensual kiss between two men, it might tarnish our hero's glowing badge of heterosexuality or something. Ugh.) Also, while I'm at it, John Grey's casting. Apparently "short, sharp, blond, very pretty" translates to "tall mopey mud-haired sadsack."

Aaaaand speaking of casting disappointments, I am very much not on board with the casting of Simon for the movie adaptation of Simon and the Homo Sapiens Agenda (title annoyingly dumbed down to "Love, Simon" for the movie). Dear Hollywood, can you please just leave books I enjoy alone. Ugh.


8. Your fandom boyfriend of the year?
I was weirdly* attracted to old Luke Skywalker.

*Actually, nothing weird about it, I liked him best (ok, better than Han, whom I always found too smug and annoying - obviously Leia beat them both by miles) in the orig trig as well, even at his sulkiest and brattiest. But Mark is really owning this older version and it's really working for me, lol. 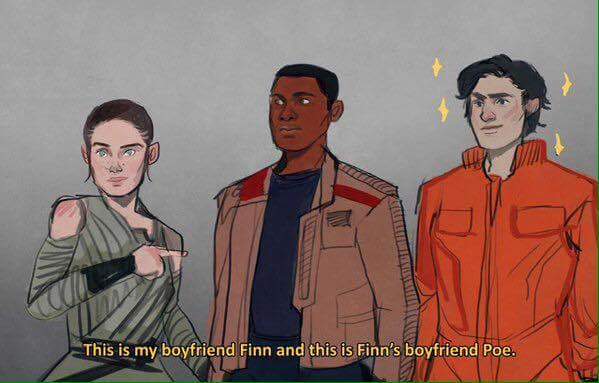 9. Your fandom girlfriend of the year?
Bill Potts, no competition!

I am still bitter than we only got her for one season :(


10. Your biggest squee moment of the year?
When Jodie Whittaker was announced as the Thirteenth Doctor. And when the regeneration actually happened - that single moment of utter incredulous delight reduced me to a wibbly mess.

11. The most missed of your old fandoms?
Well, I sometimes miss the big obsessions (AWZ, Spartacus) but they do stay with you. I'm also currently rereading HP, which is giving me many many early-fandom nostalgia moments. Oh the days when we had no idea how it would even end!

notoriouslyuniq keeps reminding me and I keep not getting round to it. It will happen!