mood: pleased
So last weekend I went to the Supanova Pop Culture Expo in Brisbane, after Dan Feuerriegel listed himself as a last-minute guest. Ergo, technically, all I need known about the weekend is that this happened: 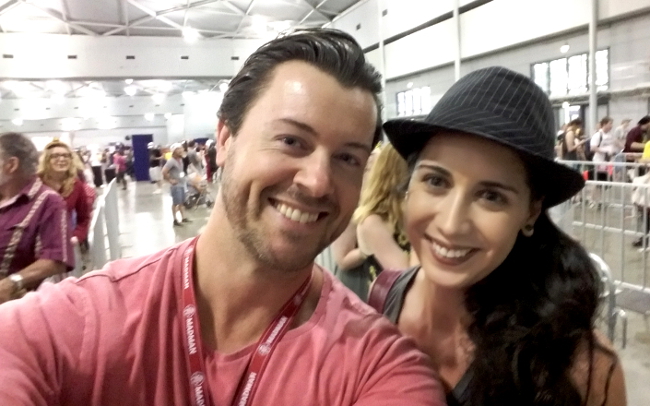 (I'm not looking straight at the camera because he was holding my phone and I was staring at his hands. He has ridiculously beautiful hands. They are distracting, ok?? Also ridiculous: his shoulders. LOOK AT THEM THEY ARE A MILE WIDE.)

However, a lot of cool shit happened and I do want to get some of the details down because otherwise they'll fade far too quickly. So without further ado, rambly details under the cut!

mood: chipper
music: Nobody's Side
So, that wee event thing that's been eating mine and

lilithilien's lives for the past months... happened. Without major catastrophe. Which still confuses my pessimistic little heart no end: "What? Things went shiny? People were happy? Had a good time? No one got throttled, abducted, lost, or otherwise abused? REALLY?"

Really. Minor hiccoughs aside, the weekend was ****ING AWESOME (yeah, sorry, NHLB-ers. I stalked your sekrit chatroom and witnessed the happening of your sekrit in-jokes ;)), unforgettable, ecstatic, blurry with fabulousity.

I've been nabbing photos from everyone left, right, and centre since I got back, since I didn't bring my own camera, so I think it'd be rather pointless to repost other people's pics, lol. (Well, maybe one. Or two. That I really really liked.) I shall focus on rambling instead. BECAUSE I CAN RAMBLE, Y/Y!


( Bring snacks. And water. And possibly a potty. Here there be babbling. )

(Now I'm home and believe it or not, I STILL have leftover condoms and lube. And I really am the last person to need them. *makes water balloons*)
Tags: alles was zählt, eskimo kiss project, flailing incoherency, glitter saves the world, lurve the lurvely friends, rambling, shitfaced squee, sparkliest fandom ever, things that make me go wheee!, travelling, utter squee, wow that's a lot of tags

Home and alive, more or less

NEXT TIME WE DO THIS, I WILL BE RICH AND FAMOUS AND FLYING 1ST CLASS, GORRAMMIT! Looooong flights and short flights are fine, but it's having a bunch of long AND short AND those hateful medium ones stuck together with layover hell in between that makes travel from and to NZ a big sockstinky failbucket.

Oh, and when Pacific Blue loses your suitcase. That isn't swell either. (It's okay, it arrived belatedly today and I can go pick it up later but OMG DID NOT NEED THAT!)

*waves tiredly at everyone* Just trying to catch up OMG YOU GUYS HAVE BEEN POSTY! LOL!

*hugs and noserubs everyone*
Tags: glitter saves the world, travelling

mood: rushed
This weekend, I did stuff, for a change!

It was the first time either of us had actually spent any time in Auckland (previously we'd just whizzed through), and it was nice to taste a bit of big city life again. We explored a bit of the downtown and gorged on massive amounts of shopping, which was bloody good fun. Then had lunch in a lovely park, and in the early afternoon went to check in and get ready for the concert.

( Counting Crows and The Who )

After the concert, Alsha and I made it back into town after some bus-related issues (the free public transport thing back wasn't nearly as well organised as getting there, so there was lots of milling about in giant crowds and stupid bus drivers giving wrong instructions) and pretty much just fell into bed, we were that tired.

On Sunday, we slept in, had a huge breakfast and went to the zoo in the afternoon. ( Moar )

Our flight back was on Monday afternoon, so we had some time to kill, though not loads of money, so we went and saw a movie. Our options were either Slumdog Millionaire or The Boy in the Striped Pyjamas. We were slightly more interested in the subject matter of the latter and also knew that Asa Butterfield, the little boy who played Mordred in Merlin, was in it, so we ended up going with that.

( The Boy in the Striped Pyjamas (dear British/American movie industries, why are you so hell-bent on appropriating the Nazi stuff? You're lovely, but you fail at being German! )

After the movie, we went to collect our bags and went to catch the plane home. Arrived last night to needy cats and piles of work that I'll somehow have to vanquish this week. DO NOT WANT. Let's have some fandom pimping instead!

graspthethorn is doing the 2009 SEXY awards over on

seifen_slash! Go forth and nominate, I command you! AWZ stuff especially... I doubt Verbotene Liebe needs any help, hehehe. SUPPORT OUR TINY FANDOM! Go and nominate fics or art you liked! It won't take a minute :D

I hope to surface a few times this week to do EKP stuff (Christmas and New Year's episodes coming up soon!) and maybe watch the show, though recaps will probably have to be shorter this week.

In other telly-related news, I've recently started watching Torchwood season 2, and holy wow, it is good! I gotta admit, I wasn't too floored by season 1 - I liked it but it seemed a bit random and didn't really capture me enough to make me want to have more! now!, but I'm definitely getting that vibe with season 2 so far. Awesome plots! Great side characters! JAMES MARSTERS! Massive amounts of boykissing! Ianto ruling with the witty one-liners! It is beautiful. And further saturating my happy little slasher heart. Really, the amount of slash I HAVEN'T had to make up this year is mind-boggling. The canon boylove, it overwhelms me!

Aaaaand I also really enjoyed the latest episode of Dollhouse! I hope they keep going like that, because that was noticeably better than the previous ones. I approve!

Now if only I could bend the space-time continuum enough to have time for all my fannish exploits, writing (In This Home On Ice will have to be put on, well, ice... for the rest of the week at least), work, eating, trimming my hedge & mowing my lawn (hahahahaha) AND the occasional sleep! But it will all work out somehow as usual, I'm sure. I DON'T KNOW HOW. IT IS A MYSTERY.

mood: exhausted
Just got back from really fabulous weekend in Auckland!

alsha and I went for a concert... The Who with special guest stars Counting Crows, and while we both went for the Counting Crows and didn't much care either way about The Who, I gotta say I walked away a total The Who fan, while CC were a total disappointment. Weird the way things work out!

Anyway, it was awesome and now I am exhausted and SO NOT READY FOR WORK tomorrow, omg. Hai f-list, I will hopefully catch up tomorrow! *smooches all*
Tags: rl, travelling